When it rains, it snows 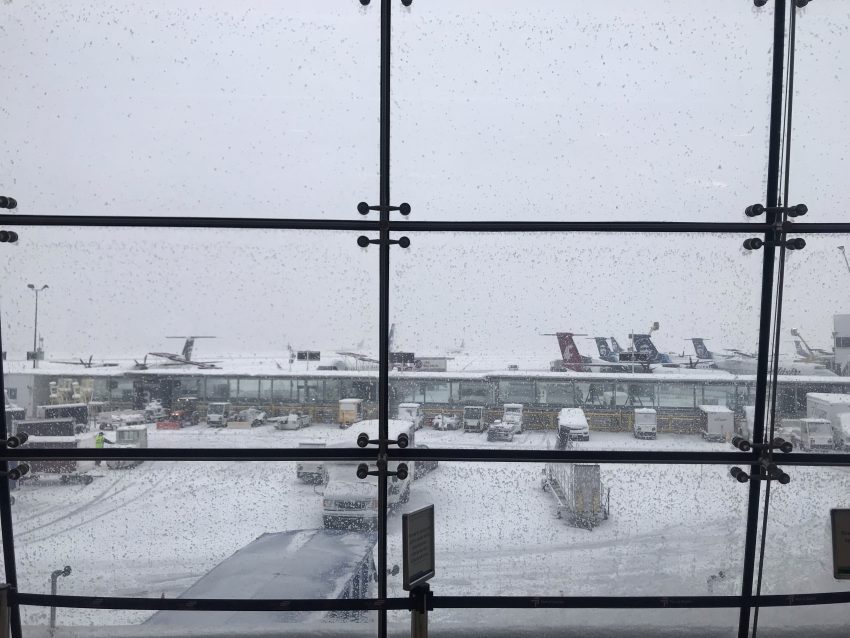 It’s been very quiet in the cafe since the first Monday of February.  I had this terrific idea to fly home early so I could have a full day of work after a long weekend with Mom and Dad.  I left my parent’s house at 4:15 am in a rental car with bad wipers and drove to the Sacramento airport in a tropical downpour.  I raced to the gate and made it on my plane. I didn’t think much about the snow in the forecast in Seattle.  They are always so off when it comes to predicting snow.  I worked on my to-do list and noticed the plane was literally flying in a circle somewhere over Oregon.  Are we heading back to Sacramento? I would learn later they were trying to delay our landing because the snowstorm was the real deal.

I waited on the plane for an hour and a half to get to the gate after landing (this was a long as my flight) and then, realized that Uber wasn’t an option, I waited for my husband to come to the rescue in our 4Runner. I made it home at noon, about four hours later than I had hoped.

My entire week was shaped by this event.  Tuesday meetings were canceled because the snow was still on the ground and kids were out of school.  By Wednesday, I was able to make it to a client training and also landed a new client (my 5th new project this year).  I raced home to work on my BNI presentation and canceled my library night. Luckily, schools opened on time for the first time that week, allowing my BNI meeting to happen.  I got my presentation done for the next few months and hit the grocery store after the meeting.  They were predicting more snow on Friday afternoon.

Friday, I had a handful of meetings, mostly coffees, but I did have one in person training with a client on Mercer Island.  It’s less than ten miles but can take 45 minutes to travel in Seattle.  The client reached out to move up the appointment due to snow and I left West Seattle at noon.  As I looked in my rearview mirror, I noticed my little part of Seattle was experiencing a whiteout.  I drove another five minutes and turned off the next exit.  I’m so glad I did.  My client was relieved, too.  They also headed home where the snow was falling hard.

By the next morning, there were almost seven inches of snow at sea level.  Up the hill from my house, it was more like ten inches. Here it is on Tuesday, and I still haven’t left my home.  It snowed off and on through yesterday evening before it turned to rain.  And while the success of my work week after visiting my parents seemed to be at the mercy of the weather, underneath it all was the real truth behind my uneasiness and feelings of no control.  It wasn’t the worry of wet snow piling up, or that I have a little roof leak or the canceled meetings.  I was the storm that is brewing in my childhood home with my Mom and Dad.

My Dad was sick the minute I arrived.  And skinny.  He’s lost so much weight in the last year. It must be close to 15 pounds since my October visit and that’s on top of the 25-30 pounds missing in the year prior. This cold my Dad had seemed serious just because he seemed so fragile.  I have not prepared myself to see my Dad fragile.  He’s been the glue holding things together while my Mom’s short term memory fades.  Once I left, my brother-in-law checked in and then my sister.  They stayed and helped them through this weekend.

This Seattle snowstorm left me at home realizing that there are so many things out of my control.  It made me realize that all you can do is prepare the best you can in life and in business but you never know what the future holds.  Will it be sunshine and roses, or sea level snow?  This is why I’ve been quiet this month. My social media schedule seems trivial, now.  I just wanted to open up and tell you all why.

Cami MacNamara has 20+ years of experience running a small, profitable, one-person web design business, so she can walk her dog whenever she likes. #WorkingSoloWP WebCami.com / Twitter / Instagram